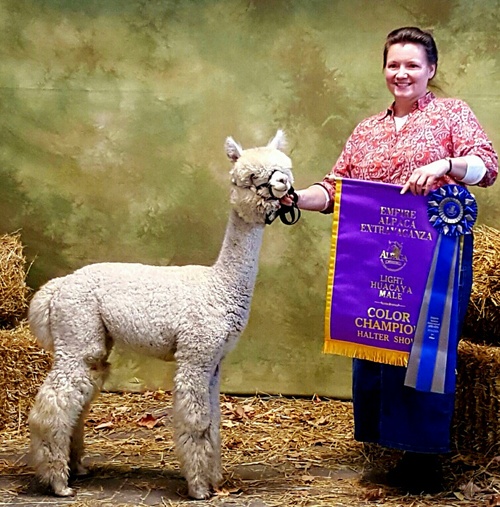 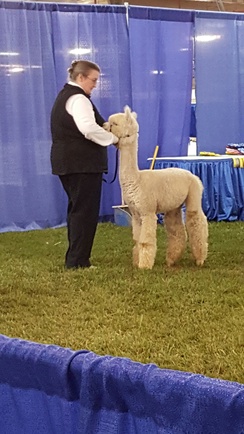 Okemo in the ring

We had a very exciting weekend this past Fall as we participated in the first AOA Dual Show, Empire Extravaganza and the NEAOBA Alpaca Show. Our juvie beige male, Clear Mountain's Okemo, not only placed first in his class, took Color Championship, and went on to win the Judges' Choice award under Helen Testa and Diana Timmerman. This was his very first show and only 10 months of age. Below are the comments Diana had for him...

Class comments:
"When I felt and pulled my sample my comment was "Dreamy". I don't know how many of you are spinners but when you find a fleece so uniform, extremely uniform, all the way through and just heavenly to touch. Along with that he has tiny, ity bity staples all over so he does have density too. He is just so super fine. All of that is packed on a very solid frame for his age. A very true to type male. "

"This male at 10 months of age has incredible fineness and uniformity. So dense within, so ity bity individual staples that he carries even down into his belly, into the lower extremities, into the neck, into the topknot, and it's just heavenly for a spinner. You probably could take a piece off and it would just float off into the air. All of that put on a well conformed build at 10 months of age is deserving of this color championship."

Needless to say we are very excited to see how Okema continues to do as he matures and grows over time!